I want to tell this story to the many who can have a laught on me and also to the ones who are going to Yosemite and planning activities.

On August 2017 I had a great solo trip in San Francisco and Yosemite, here I want to tell you an highlight of those days.

The day before I defined the outline of the path, the plan was essentialy to get by car to the Porcupine Creek trailhead on Tioga Road, to take that trail and then to follow the Snow Creek trail down to the village. Once there I should have eaten and rested and decided if was going back to the car by shuttle or by feet up the Yosemite Falls trail. Here the path on Google Maps.

Let start with premises, I wasn’t in my best physical form and I hadn’t the right gear (i.e. Vans and thin socks).

Anyway, on 4th August at 10:42 (yeah I know it’s late) I was at the trailhead and started walking.

The trail was plain, just a descent in the woods, until the fork, here a worrying notice reported bear activities (heh). 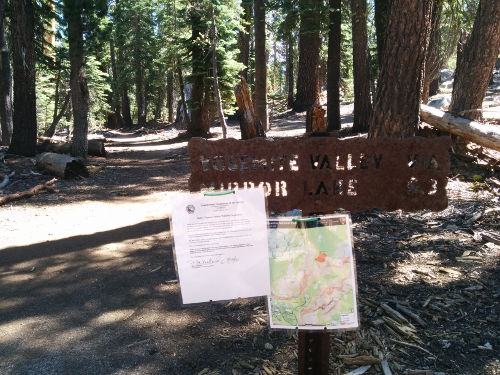 Here I turned left and took the Snow Creek trail to Yosemite Valley via Mirror Lake, from then on the trail gets better and better. The whole ~half part is quite flat, just a bit of ups and downs while the wood starts to clear revealing a panorama prettier every step, and the terrain slowly changes from soft to rocky getting near the river of Snow Creek, here the trail is quite fun to walk.

Past the first half as I said the trail changes drastically, you now see the Valley from near the top, just great, but you have to suffer to balance, it’s a very steep descent with a lot of switchbacks; you will also get a LOT of sunlight nearly any time of the day so protect yourself, I swear it was the major obstacle, as the sunscreen drained into my eyes while my skin was burning anyway. It was worth it.

Reached the bottom of the descent I enjoyed the nice shades around Mirror Lake, here I finally found some people, the trail up to this point wasn’t very crowded (cool). Now the most boring part of the hike: from Mirror Lake to the Village, better take the shuttle, I didn’t, and it was quite long and dull, skip it. The total descent took 4:30 h, 20 km, 1257 m eleveation loss, GPX here.

I arrived to the Village a bit beaten, mainly because socks were disintegrated; but after a good (actually a not so good pulled pork sandwich) refreshing lunch I got into nirvana. I collapsed on a bench reading The Girl with the Dragon Tattoo and took my rest. At this point, since it was getting late, I shelved the idea of climbing back to the car.

But, knowing that I was going to take the shuttle, I took a nap longer than I should.

I didn’t know that the last departure was at 17:30. I went to the Visitor Center to ask about alternatives just to find that it closed at 17 (come on). I stepped on a Valley shuttle and the driver couldn’t help me. It was getting very late, I had to act. I went to the shop and bought Merino wool socks and a headlamp. I think you know where this is going.

At 19:40 I was at the Yosemite Falls trailhead. Me; new socks and headlamp; shorts, shirt and CKJ light jacket; my Vans Authentic (almost ripped apart); a lighter; some food; 2.5 liters of water; an almost discharged phone I turned off; and a Garmin fēnix 3 that would have been essential to my mission completion, such a great gear.

Next day in the afternoon I had a flight at SFO.

I started ascending, at 20:15 I met the last descending people, who wished me luck, and from that moment I had to turn my headlamp on. Because of random sounds around me I decided to throw away the food alreay opened (I had more, indeed). At some point I ran out of water and I had to fill the bottles with running water from the soil. The climb was strenuous but the adrenaline kept me going fast, non-stop to the top of Yosemite Falls, but once there wow, I took a moment of rest. I felt great, the sky was unimaginable and the view on the valley human lights awesome.

Past the falls the path got flatter but a bit harder to follow, at that point I wasn’t sure to make it before dawn but I knew I had my lighter in case of a sleep over (I would have lost the flight, though). Until this point I kept the GPS off on my fēnix to save battery, luckily: a few km after Yosemite Falls I expected to find the fork between Porkupine and North Dome trails right before a river crossing, but I found a river before said fork and wrongfully tought I couldn’t see it since it was night. Here the Garmin came to save the night: I could see on it the path I took in the morning, and which my planned returning path should have joined near where I was, so I began to follow the gave direction. It worked, even if it took almost 2 hours to walk less than 4 km, given that I had to cross thorns, burnt vegetation and ditches. Back on the trail reaching the end had been a breeze, and at 3.21 I finally arrived. The total ascent took 7:40 h, 20 km, 1600 m of elevation gain. I have only the GPX of the final stretch, starting from the middle of the off-track part. To conclude, yes, I managed to return to the hotel in Mammoth Lakes, get a sleep and drive to SFO to take the flight.